Difference between revisions of "The Proper Boskonian" 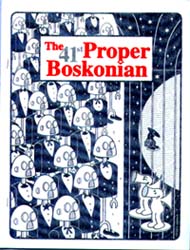 The Proper Boskonian is a science fiction fanzine published by the New England Science Fiction Association.

Cory Panshin had previously co-edited, with Leslie Turek, six issues of the MITSFS fanzine Twilight Zine from 1966 to 1967.