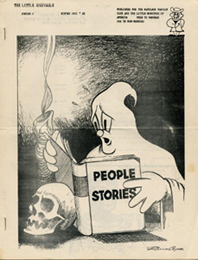 The Little Corpuscle was a science fiction fanzine by Lynne Hickman, later joined by Carole Hickman.

Published in Statesville, North Carolina, U.S.A., in the 1950s, The Little Corpuscle was a companion zine for TLMA, "The Little Monsters of America", which was a science fiction club co-founded by Lynne Hickman and Wilkie Connor, with a roster of around 300 members that lasted from 1951 till 1952. The club was for people who were stared at "as though (they) were a little monster or something" when they left a newsstand carrying a science fiction magazine. The goal of the club was to promote science fiction and fantasy reading. TLMA was the official organ, running for six issues, with three issues of The Little Corpuscle appearing.

Artwork was contributed by Ronald Clyne, among others.

Fred Robinson reviewed issue 2, from Winter 1951/1952, in the March 1952, #2, issue of his fanzine Straight Up ; "The most striking feature of this mag is the number of different methods of reproduction contained in it. No less varied is the colour scheme, there are pages in purple, black, red and green, however it is all very neatly done and a special word of praise is in order for the art work. The cover is by Clyne and is really amusing. Inside are a fine selection of stories, articles and features, poetry too... Editor Lynn Hickman has done a fine job on thish, and I for one look forward to future issues of similar quality."

TLMA and The Little Corpsucle were merged by Hickman into STF Trends starting in 1953.