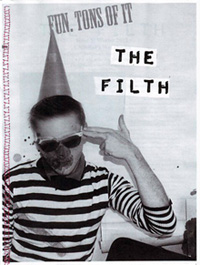 The Filth Zine is a literary zine by Karley Bayer.

Based in Baltimore, Maryland, U.S.A., The Filth Zine is a 20+, full-sized, black and white publication. The binding is sewn by the Filth’s creator, editor and short story contributor Karley Bayer.

Other contributors include G.B. Jones, Keith Landrum (Every Reason), and Deirdree Prudence (Gag Me With A...).

Each issue of The Filth features an interview with a DJ or independent musician, and an exclusive CD. Previous guests have included: Da Moth (LA based), Ace Hernandez and the No Boom Boom Soul Brother (Baltimore), Sir Morbit (Odessa, Texas), DJ Raiu (Gainesville, Florida), and Gring-Oh-Star (LA).

Contrary to the name, The Filth does NOT specialize in stories about unicorns and rainbows, “lost puppies finding their way home against impossible odds”, or peach cobbler. The zine also contains drawings, photos, and comics.

The Filth comes out four times a year.

Karley Bayer is also one of the co-editors of Sorrow Pants, along with Tina Armstrong, Keith Landrum and Deirdree Prudence.