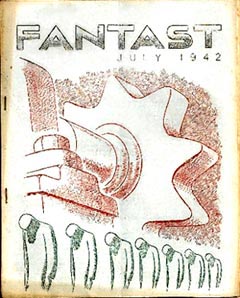 The Fantast was a science fiction zine published in the UK from 1939 to 1942.

The first issue appeared in April of 1939.The Fantast was originally produced in England by Christopher Samuel Youd, who edited the first nine issues up to 1941, until he was called to duty in WW II. He passed the fanzine on to Douglas Webster who then published the fanzine from Aberdeen, Scotland, releasing five more issues until the last one appeared in July 1942. Issues 9 and 10 were co-edited with John F. Burke, incorporating his fanzine Satellite.

Art contributions included illustrations and covers by Osmond Robb and Harry Turner, editor of Zenith, to which all three editors of The Fantast were regular contributors.