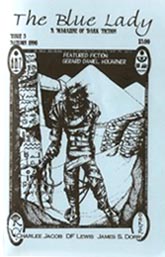 The Blue Lady is a small press publication devoted to horror and weird fiction published by Donna Taylor Burgess.

Subtitled "A Magazine of Dark Fiction", The Blue Lady was released in Murrells Inlet, South Carolina, U.S.A., in the 1990s. Besides fiction, it also included poetry, art and essays. The first issue appeared in 1994, with 7 issues released until the last issue in 1997.

Art work was by Erik Wilson.