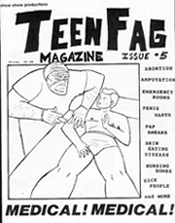 Teen Fag was a queer zine published by Gordon Gordon.

Created in Seattle, Washington, this publication first appeared in the 1990's and was issued for a number of years. Six issues appeared during that time, the last one a compilation of highlights from previous issues.

Teen Fag is included in the Sophia Smith Collection at Smith College.