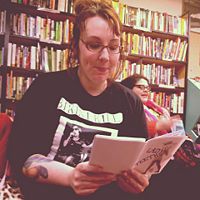 In 2005, she published Girl Swirl: The Book, an anthology of the previous 12 issues. She also ran the online shop My My Distro, wrote the YA novel A Girl Called Mike, and released seven issues of Sub Rosa, as well as a collection of mini zines with various titles.

Her current zine is Lady Teeth, the third issue of which is scheduled for release in summer 2013. Hipp has a memoir, Heavy Hangs the Head, being released in August 2013 by Sweet Candy Distro.