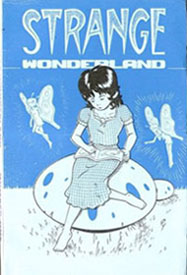 Strange Wonderland was a literary horror zine published in Victoria, British Columbia, Canada, in the 1990's. The Art Director was Paul Young. The first issue appeared in 1997.

Poetry was contributed by Nancy Bennett, among others.

The short stories "Blackberry Pie", and "Coming Of Age", from Issue 1, and "Erin's Point", from Issue 2, all by Jeanne Brannesecca, "Keep of the Mist" by Cynthia I. Green (Issue 2), and "That Old Silk Hat They Found", by Mark Leslie (Issue 1), "Family Reunion" by Kate Riedel (Issue 2), and "Going Grey" by W. Gregory Stewart (Issue 1), were long-listed for the 1998 Prix Aurora Award for Short Fiction, and the poems "I Held An Angel" and "Silver Knights on Metal Steeds" by Nancy Bennett (both from Issue 2) were long-listed in the category Best Other Work in English.

According to the editor and publisher, a second issue was published and sold out, so no copies are available for comment.