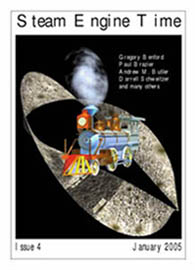 Steam Engine Time was first published in the 2000's. The first three issues were co-edited by Gillespie with Maureen Kincaid Speller and Paul Kincaid, and since then with Janine Stinson, editor of Peregrine Nations. It was conceived of by the editors as an 'international' fanzine, with Bruce Gillespie in Australia, and Janine Stinson from Michigan, U.S.A.

Also included was an interview with author Kaaron Warren by Liz de Jager.

Janine Stinson previously co-edited The National Fantasy Fan for the years 2000-2001, and published Peregrine Nations from 2001 till 2008.