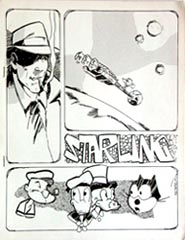 Starling was a science fiction fanzine by Lesleigh Luttrell and Hank Luttrell.

Starling was first published in the 1960s in Missouri, U.S.A. The first two issues were published by Tim Eklund with Hank Luttrell and Roger Alan Cox (1964). Starting with #3, Luttrell published and edited it by himself, and was joined by Lesleigh Couch with issue #9 (1967), who became Lesleigh Luttrell in 1969. The two moved to Madison, Wisconsin, U.S.A. where they continued publishing. Early issues of Starling were distributed through the Southern Fandom Press Alliance APA. It was published for more than a decade, with issue 3 appeared in 1964 and issue 37 in 1979, the last issue so far. In 1975, Starling was nominated for a Hugo Award for Best Fanzine.

In sf critic Rob Latham's article "Fanzine Research", in the April 2008 issue of el,, he wrote of Starling, Susan Wood's Aspidistra, and ODD, by Raymond and Joyce Fisher with Richard Elsberry, that they were, "vehicles of antiestablishment attitudes virtually indistinguishable at times from the contemporary underground press.” He cites these fanzines as examples of sf fans seeking "...to bring sf into dialogue with a larger universe of discourse and action—rather than, as elitist snobs sometimes suggest, looking to “escape” from the real world into aimless fantasy."

Contributions of poetry came from Jerry Kaufman (The Spanish Inquisition), among others.