Difference between revisions of "Stardock (Canada)" 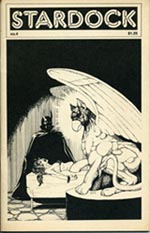 Stardock was a science fiction and fantasy fanzine founded by Charles R. Saunders, and published on behalf of the Ottawa Science Fiction Society (OSFS).

Six issues were released from the Summer of 1977 till Fall 1986. The first few issues were edited by Charles Saunders. The fourth issue was edited by Jeff Cohen, with Kim Kofmel one of the subsequent editors.

Interviews with writers such as John Brunner (Noise Level) were also featured.

The story "The Nooseneck Hill Horror" by Michael Danagher is considered by Edward P. Berglund to be an integral part of the Cthulhu Mythos.