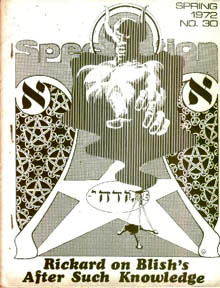 Speculation was an award-winning British fanzine edited by Peter Weston.

Speculation was released under the title Zenith for the first six issues, which lasted from 1963 till 1964. It was then called Zenith Speculation for issues 7 to 13, between 1964 and 1966, during which time Peter Weston was also publishing the apazine Nexus. After 1966, the fanzine assumed its final identity, Speculation.

Illustrations were contributed by Jim Cawthorn, Eddie Jones, Vincent DiFate, and Pamela Yates. among others.

A special issue of Speculation was part of the Thirdmancon Combozine (April 1968), which also included special issues of Badinage, Gothique, and Scottishe.

A series of "Speculation Conferences" were also organised, adopting a similarly "sercon" approach to science fiction analysis. It won the very first Nova Award for Best Fanzine, in 1973.