Difference between revisions of "Space Diversions" 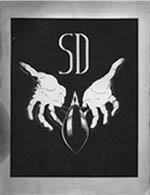 Space Diversions was a science fiction fanzine published by the Liverpool Science Fiction Society in the UK.

The four editors, Dave Gardner, Tom Owens, John Roles and Norman Shorrock, fluctuated throughout the run of the fanzine. The Art Editor was Don MacKay. Issue 1, edited by Tom Owens and John Roles, was released July 1952. Issue 11 was the last issue and appeared in June 1960, edited by Norman Shorrock and distributed through Offtrails Magazine Publishers Association. Eleven issues were published throughout the 1950s until 1960, plus a special issue, called "7a", (June 1954) was made up for the Supermancon.

Columnists included Vargo Espley, with "Sprockets, Missals, and Space Gabble", and John Owen, with "Drums Along The Mersey".

The group's clubhouse was a rented cellar called the 'Space Dive'. Aside from publishing Space Diversions, they had bought a tape recorder and produced recorded plays in collaboration with other fans whichthey called "Taperas" (Tape-Operas), and which were presented at conventions.

Norman Shorrock went on to co-publish Bastion with Eric Bentcliffe.