Difference between revisions of "Slut Magnet" 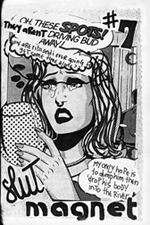 Slut Magnet was a zine by Cleo that was published in Alberta, Canada.

Slut Magnet was a cut and paste production that wasn't stapled but held together by a piece of tied burgandy yarn. It was a Riot Grrrl zine that contained opinion pieces about women in society, gender stereotypes, homophobia, and feminism, from the viewpoint of a young queer woman in high school. There were also articles on Donna Dresch's band Team Dresch, on the comic Hothead Paisan by Diane DiMassa, on the film Tank Girl, and on the zine Jane Gets A Divorce by Jena von Brucker. A special feature was "Frat Pig of the Month", in which Cleo or editors of other Riot Grrrl zines would nominate a young man of their acquaintance for this honour as a result of outstanding chauvinism. A number of issues of Slut Magnet appeared in the 1990's.