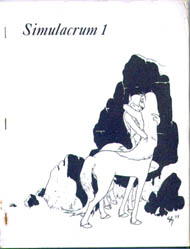 Simulacrum was a science fiction fanzine by Victoria Vayne.

Simulacrum was published in Ontario, Canada. The first issue appeared in June 1975. Eight issues were published in all, the last, #8, in December 1978.

The article "But What About Photosynthesis" by Janet Wilson was reprinted in the anthology Toronto the Ghood, edited by Taral Wayne.