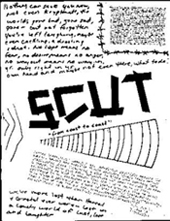 Scut is an anarchopunk zine by Tom Scut.

Released in the late 1980's in Selden, NY, U.S.A., Scut was a photocopied, cut and paste zine devoted to anarchist politics and punk music. It had previously been called Breaking Chains 4 Emily.

On the cover of issue two the editor announces the underlying principle of the zine: "no matter how horrible things may seem, one always feels better complaining about them."

Articles in the second issue included "I Slept With Donny The Punk", an account by the editor of staying over with a friend at Donny The Punk's apartment; despite being "...in the clutches of the biggest threat to machopunk since androgyny", nothing happens. There is an interview with the band A Dying Gymnast; "Diary of a Vege-Marxi-Tarian" by Ray; "News from The Front", a series of reports on activites such as the December, 1986 activities of the animal liberation group "True Friends", students occupying the administration building at S.U.N.Y. at Stony Brook in February-March, 1987, and striking workers in Scotland taking over Caterpillar Multinational factory on Mar, 1987; as well as reviews of books and zines such as Neither/Nor Press.

Editor Tom Scut was later a member of the hardcore band Pollution Circus.