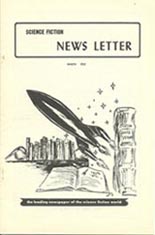 Subtitled "The leading newspaper of the science fiction field", and published in Bloomington, Illinois, U.S.A., it was released bimonthly, starting in December 1945 and running until Spring 1953, with a total of 29 issues. It began as the Bloomington News Letter, a one sheet of news items. By the time the title changed to Science Fiction Newsletter with issue 15, published in April 1950, it had grown to eight pages, complete with photographs and art work.

Photographs were by Bob Tucker.

In 2001, Science Fiction Newsletter won the Retro Hugo Award for best Fanzine for the year 1950.

Bob Tucker was also the editor of Le Zombie, among other fanzines.