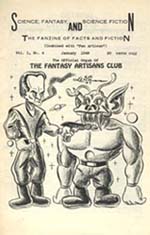 The first issue appeared in April 1948, the second in July 1948. The third issue, released in October 1948, announced that Science, Fantasy, and Science Fiction was now the Official Organ of the Fantasy Artisans Club and was a split zine with Jerri Bullock and Russ Manning's Fan Artisan. The fourth issue, appearing in January 1949, had an announcement on the cover that the zine was now combined with Fan Artisan.