Difference between revisions of "Salud" 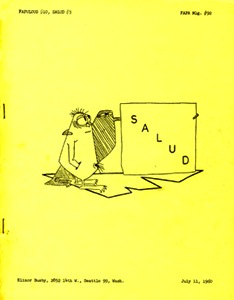 Salud was a science fiction fanzine by Elinor Busby.

Salud was an Apazine published in the 1960s and distributed through Fantasy Amateur Press Association. Some issues were split with Busby's other fanzine Fapulous. This title appeared up until the late '60s, with issue 28 released in November of 1967. It was produced in Seattle, Washington, U.S.A.

Comments came from Jane Ellern, among others.

Salud was in the main a perzine, although each issue also contained "mailing comments" on the other fanzines that Elinor Busby had received in the monthly FAPA mailing, as well as news of the science fiction community.