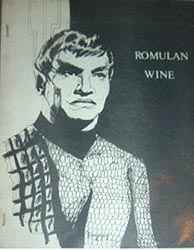 Published in the U.S.A. in the 1970s, Romulan Wine is an anthology of fiction and articles dedicated to the television seriesStar Trek (the original series).

Dave Puckett, comic artist, writes, "Cara published a fanzine called Romulan Wine which was basically dedicated to Star Trek, of which she (and I as well) were big fans [...] She had asked me if I was interested in writing and penciling a strip, and she'd revise and ink it, and we wanted something in the Star Trek fashion. I wrote a story about Ancient Vulcan, the main character of which was a chieftain named Mort III. Cara loved it, but was afraid that Gene Roddenberry might not approve, so she wrote him several times, and eventually, he did indeed approve of the script and even gave his blessing, making it an authorized part of Vulcan History. She published it in two-parts in her fanzine, and, to my knowledge, it was the first time anything in comic strip format referring to Ancient Vulcan was ever published. The one precedent we set in the storyline? The sun on Vulcan rose from the West."