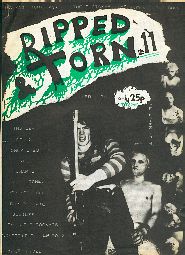 Ripped & Torn is a fanzine from Glascow, Scotland.

The first issue appeared in November of 1976. Ripped & Torn was one of the first generation of fanzines to emerge from the UK punk scene. The cut and paste zine covered bands such as The Damned, Sex Pistols, Patti Smith, Generation X, Raped, Jonathan Richman and The Modern Lovers, Iggy Pop, Only Ones, Suicide and, in later issues, Throbbing Gristle. Also included are items such as a photo spread on Derek Jarman's film Jubilee, and posters of artists such as The New York Dolls and Nico. The zine was put together by Tony D with help from Skid DeSade and Grant McNally. Other contributors included Jeremy Gluck and Alex Fergusson. Tony D. also contributed to Rotten To The Core.

Tony D. says, "Already you can hear the shrieks of the old rich as they realize they've been made redundant by the energy-ridden bands who work out of necessity in cheap clubs with lousy P.A.'s". Ripped & Torn announces itself on the cover as "the first Scottish punk mag written by fans...for fans" and proclaims that "This mag fights against the customary the average the dull".

Selections from Ripped & Torn were included in the book Punk, edited by Julie Davis, which was published in 1977 in the UK. Eighteen issues of Ripped & Torn were released during the period from 1976 till Tony D bequeathed the zine to Vermillion Sands, who continued publishing until 1979.