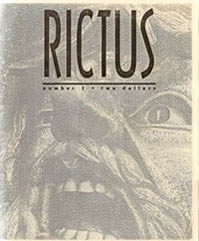 Rictus is a literary fanzine devoted to horror fiction and the supernatural, edited and published by Mary E. Spock.

At least eight issues were published in Washington, DC, U.S.A., during the 1990s. Each issue featured horror and dark fiction and poetry. Issue 2 was released in July 1994. By issue 9 it had moved to the Internet.

The Art Director was M. Leclair.