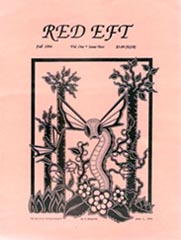 Red Eft is a small press publication edited and published by Meg Smith.

Red Eft is devoted to horror, Gothic, and speculative fiction and art and is published in Lowell, Massachusetts, U.S.A. It was founded in 1994. In 1997, Vol. 2, No. 1 was released.

Meg Smith has also published the zines Dracula Meets Jesus and The Banshee.