Difference between revisions of "Rataplan" 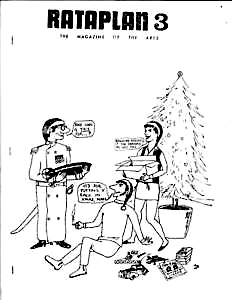 Rataplan was a science fiction fanzine by Leigh Edmonds and Diane Bangsund.

Rataplan was published in Victoria, Australia. The first issue appeared in 1969. It was distributed in the U.S.A. through APA-45 and FAPA. Leigh Edmonds began the fanzine with Diane Bangsund; by 1979 for issue 19, his co-editor was Valma Brown. 31 issues were published in total, the last issue released October 1984.

Letters came from Graham Charnock, among others.

Rataplan was nominated for a Ditmar Award for Best Fanzine in 1969 and 1973, and won the award in 1984 which was shared with another of Leigh Edmond's zines, Ornithopter.