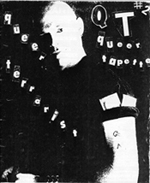 Issue one includes an interview with the band Gorse from New Zealand, whose members included John, editor of PMt zine; articles on the bands Vampire Lesbos, and Anus The Menace; "War is Menstruation Envy"; reprints of tabloid newspaper covers from the 1950s; an article on harrassment of Asian dykes and punk fags at Ottawa bar Takticks; and "Positively Perverted", about outraged reactions to Kiwi's article about Queercore in a local radio station newspaper.