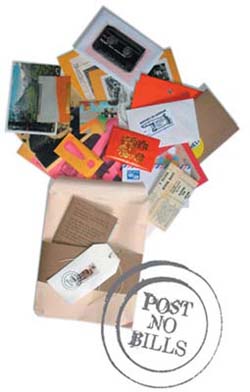 Post No Bills was a mail art and letter writing network commenced and facilitated by Sydney, Australia based zinesters Emma Davidson and Anwyn under the name Papercut Collective. The project ran from 2005-2006, with approximately 30 participants at its peak, and resulted in the 'Post No Bills Fun Pack.

Participants exchanged materials via a physical mailing list which was updated and maintained by the facilitators. After a period of twelve months they were invited to return materials to the facilitators, who then compiled the Post No Bills Fun Pack.

Originally, the outcome of the project was to be the production of a zine or more traditional publication that would document some of the postal exchanges. Ultimately, Anywn and Emma did not feel that such a format would be sympathetic to the highly tactile nature of the materials that actually emerged from the project, and so the Fun Pack was born. The Fun Pack consisted of contributions from participants, including letters, small paper-based art works such as collages, zines, postcards, mix tapes and cds. These were reproduced as closely as possible to the originals (tracklistings only, in the case of music mixes) with colour and black and white photocopies and a wide variety of paper stocks and envelopes, which were then presented in a single larger envelope as an edition of 150.