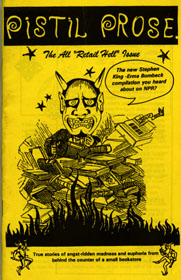 Pistil Books was an independent bookstore that carried a lot of zines. In the late 1990's the staff began their own zine to publish poems and stories. The main people behind the little zine were Amy Candiotti and Sean Carlson. Each issue had a theme, themes included "Obsession" and "Retail Hell." The zine folded after about half a dozen issues and the store closed in the early 2000's.