Difference between revisions of "Pig Paper" 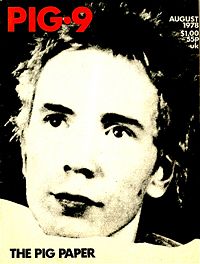 The Pig Paper was Canada’s very first self-published music fanzine, one of the pioneering, and longest-lasting examples of that country’s vibrant small press pedigree.

Beginning life in the early Seventies as record-hunting correspondence between founder/publisher Gary Pig Gold and his oldest friend, Doug “Rock Serling” Pelton, the first Pig Paper to be made available to the public was a mock-concert program sold during a 1975 appearance by The Who in Toronto.

Two years later, The Pig Paper was covering Canada’s nascent punk rock scene, publishing some of the first-ever in-depth articles on such bands as Teenage Head, The Viletones, and Simply Saucer as well as early reviews and interviews with The Ramones, Sex Pistols, Talking Heads and many others. Each issue also contained material on vintage acts such as The Beach Boys and Elvis Presley, as well as offering performers such as Half Japanese and Jandek many of their initial appearances in print.

The Pig Paper duly gave birth as well to the Pig Records label in 1978, issuing the first release by Simply Saucer, and Gary’s widely-syndicated Pigshit column, which first appeared in the February 1979 issue of Flipside Magazine, continues to run monthly online to this day.

Pictures, stories, and interviews, both old and new, on The Who, including a lengthly discography, packaged together as an Official Concert Program and initially sold only on the streets outside Maple Leaf Gardens in Toronto when the band performed there on December 11, 1975.

A small literary “coda” and update on The Who, inserted into reprints of Pig Paper 1 and again sold outside Toronto’s Maple Leaf Gardens when the band returned there on October 21, 1976 (coincidentally, Keith Moon’s final public performance with the band).

The “True Kink Konfessions” of Simply Saucer’s Edgar Breau, distributed free-of-charge to concert-goers when The Kinks played Maple Leaf Gardens in Toronto on April 29, 1977. This was also the first Pig Paper made available outside of Canada (at the Kinks’ show in Buffalo, NY the following evening, as well as during their in-store appearance at Buffalo’s Record Theatre the day after that).

An interview with The Ramones (conducted at their June 18, 1977 Toronto performance and party afterwards), an article/discography on the Australian band The Saints, Rock Serling’s first “Delete Zone” column, the Sex Pistols’ “Anarchy In Canada,” “Elvis Is Dead” obituary, Pig Paper photographer Johnny Pig’s run-in with Thin Lizzy’s Phil Lynott, “Pig Punk Part One” (Teenage Head, Simply Saucer, The Viletones, Battered Wives and The Curse) plus record reviews of the Saints’ (I’m) Stranded, The Beach Boys Love You and Surfin’ With The Viletones.

Interviews with The Hollies, Eddie and the Hot Rods and the Boyfriends, articles on Tommy Ramone, Freddie and the Dreamers and the Vibrators, the first “Pigallery” photo spread, “Pig Punk Part Three” (Dole-Q, The Ugly, Afrika Korps, The Poles, Stanley Frank), plus record reviews of Iggy Pop, XTC, the Dead Boys, Bay City Rollers, Suicide, Dwight Twilley Band, X-Ray Spex, and many more.

Interviews with Elvis Costello and The Viletones, The Forgotten Rebels’ Fan Mail, Jeremy Gluck’s “Stupid Songs I Have Known,” The Runaways at the El Mocambo, The Diodes in New York City, Bill McAvory’s first Classic Canada column, “Pig Punk Part 4” (Blue Reimondos, Jumpers, The Good), plus record reviews of the Heartbreakers, The Monkees, Rich Kids, Damned, Eric Burdon, The Rutles, and many more.

“The Strange Case of John Lennon,” PiL, Marianne Faithfull interview, plus the Paul Revere and the Raiders record (review) that never was.

The first of the two-page giveaway Mail Art Pig Papers, featuring Part One of an interview with the Dream Syndicate.

Part Two of the Dream Syndicate interview, plus the first Ace Backwords Comix.

Interview with Fat Mike of NOFX.

“Why I Hate the Psychedelic Revival” by H. Gertz, plus Eddie Flowers’ first “L.A. Blues” column.

“Confessions of an Ex-Loved One” by Ed O’Bryan, Part Three, plus John Crawford’s “The World’s First Hardcore Compilation Letter!”