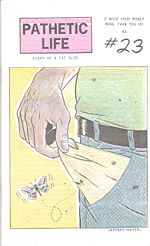 Pathetic Life #23 cover
Pathetic Life: Diary of a Fat Slob was a perzine by Doug Holland, in which he wrote about his day-to-day activities in San Francisco and Berkeley, California, U.S.A. in a diary-style format.

Doug started the zine in the June 1994, releasing it on a roughly monthly basis. The last issue, #25, was published in September 1996. The title of the zine came from a quote from Doug's ex-girlfriend: "You've got no money, no friends, you live in a slum, and you're too damn fat to have sex. Your life is pathetic."

For most of his zine, Doug lived in one of San Francisco's low-rent hotels and supported himself by working a variety of odd jobs, which he recounted in his zine. In early issues, he passed out fliers on Castro Ave., while wearing a cape. Later, he manned a table on Berkeley's Telegraph Avenue, selling stickers and magnets. His daily diary entries included topics both mundane and outrageous: what he had to eat, bodily functions, failed romances, or shaving a guy's ass hair for $5 an hour. It also included letters (often with cranky responses from Doug), zine reviews, and movie reviews. Later issues of the zine featured cover artwork by Jeff Meyer.

In #25, Doug wrote about how people had begun to approach him on the street or at his table on Telegraph, asking if he was Pathetic Doug. Though he welcomed the correspondence he received from his zine, Doug said he saw these encounters as an invasion of his privacy, and he vowed to stop writing so much about his day-to-day life. This proved to be the final issue of the zine. Around the same time he stopped publishing Pathetic Life, Doug started Zine World, a review zine.