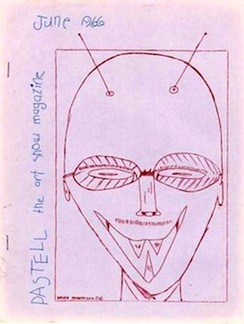 Pas-Tell was a science fiction fanzine by John and Bjo Trimble.

Artwork was contributed by George Metzger, and Bruce Robertson, among others.

Letters came from Barbi Johnson, among others.

Ron Bennett, in Skyrack #92, from September 1966, writes, "The Art Show Magazine, for all budding and established artists. News and opinion of the Worldcon artshows, survey, advice and opinion on fan and pro artwork, layout, mimeo colourwork, etc etc. Highly recommended."

In his biography for Fan Guests of Honor Bjo and John Trimble for "Conjosé", the 2002 Worldcon, Tom Whitmore writes, "Without John and Bjo, conventions might not have art shows. Their Project Art Show, and its fanzine 'Pas-Tell,' changed the way fans look at art. In the early days of fandom, the art at cons was donated by publishers (generally magazine publishers) for auctions to help cover the convention expenses. Since the art shows started, they have become one of the major sources of new professional artists (George Barr, Alicia Austin, Tim Kirk and many more started there) and artists in SF have taken on a great deal more power and respect."

Earlier in the 1960s, Bjo and John Trimble had edited the Los Angeles Science Fantasy Society fanzine Shangri L'Affaires from 1960 till 1961. In this same period both John and Bjo Trimble appeared in the fan film The Musquite Kid Rides Again, based on The Ballard Chronicles by Lee Jacobs. It featured several other members of the LASFS, such as Ron Ellik, as The Musquite Kid, Charles Burbee, Ingrid Fritsch, Terry Carr, Bruce Pelz, Robert Lichtman, Ted Johnstone, Ernie Wheatley, Jack Harness, B.R. Toskey, Jim Caughran, Karen Anderson, and Dean Dickensheet. It was produced by Unicorn Productions, which Bjo and John helped found. They also published the fanzine Melange.