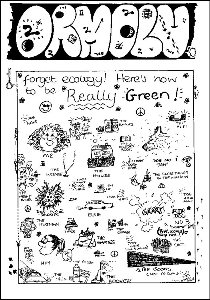 Ormolu was a British fanzine published and primarily written by Ann Green. The first issue was distributed in October 1992, the second in early 1994.

A third issue was planned and prepped for release in late 1994, but never printed. The main article, a report on the 1994 fannish event MiSdemeanour, is finally due to appear in the tenth edition of Peter Weston's Prolapse in 2008.

Green also presented a "live" version of her fanzine at MiSconstrued in 1995, based around her experiences in nursing. According to Ansible, it included, a 'letter column' of audience answers to compulsory questions. Of the experience, Anne said, "The fun thing about doing a live fanzine is not having to worry about apostrophes." - Ann Green, 1996