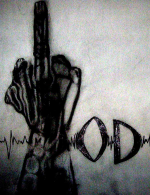 ODmagazine is a free zine from Maple Ridge, BC, Canada, which is in the lower mainland of Vancouver, BC. You can find it at Spartacus Books, or The Cobalt, or order it from Brew Distribution or 0¢ Distro, or print them for free off the website.

It was started and put together by Mr. Morder and RUNT(OFTHELITTER) shortly after Hunter S. Thompson committed suicide, with the first issue published on April 22, 2005. It's been going fairly steadily, and has had many contributors, some regular (like GirlInTheTree, Tragic, EndlessNameless, MachineDriven, Flash Gordon, and Ulysses), others occasionally, if more than once (Skiff, Chaos, F4merlyHomeless, MetalHead, Axis, BrentLeeDesign, Ben King, LoveRules, NewDawn, and more), with a zine every 1-1.5 months.

"ODmagazine is a depressing, socially concious rant session, published in a little shack in Maple Ridge with photocopies and staples. Art, music, poetry, life under the heel of the Vancouver Olympic Committee--OD's about as D.I.Y. underground as it gets. And FREE!" - David Bertrand, The Nerve Magazine

Another thing ODmagazine spawned is the ODcollective, which works toward bringing down as many barriers as they can, and opening up the scenes (in music, spoken word, art, writing, D.I.Y., anarchism & activism) around Vancouver and the lower mainland to each other. They now put on shows featuring as many talented and like-minded bands and genres as possible, and even spoken word, and they began a compilation series (where every CD is free!) with the first CD released April 21, 2006, now available through 0¢ Distro, and Brew Distribution, out on the collective's own label, Pickled Whale Meat Records.