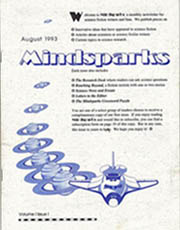 Included were interviews with Gregory Bennett, Kate Elliot, and William Gibson (Genre Platt), among others.