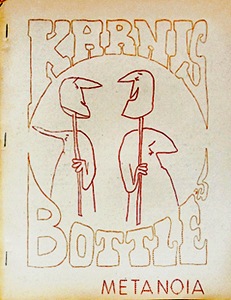 Metanoia was a science fiction fanzine by Greg and Suzy Shaw.

Metanoia was published in Fairfax, California, U.S.A. in the 1970s. The title is sometimes given as Karnis Bottle's Metanoia. Thirteen issues were released between 1970 and 1973. By issue 6, appearing in August 1970, Suzy Shaw was listed as co-editor. Issue 7 was released September/October/November 1970. Issue 13 appeared in February 1973.

Arnie Katz, in his article "What Are The Greatest Fanzine?", in Vegas Fandom Weekly #99, from July 2007, writes, "Greg Shaw inspired a vogue for small, personal fanzine in the mid-1970s with this zine, which remained tops in the boomlet it created. Greg combined personal experience, fannishness and an intense interest in popular music into a wonderful editorial package."

Greg Shaw had previously published the science fiction fanzine Feemwlort; and Entmoot, a fanzine devoted to Tolkien and his books, both titles released in the mid 1960s, as was his music fanzine Mojo-Navigator Rock & Roll News. He went on to release Who Put the Bomp!.