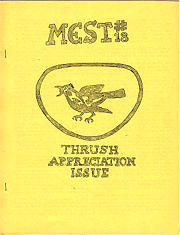 Mest is a science fiction fanzine by Ted Johnstone.

Issue 18 was special "Thrush" appreciation issue, and featured the story of a hoax perpetrated by Johnstone and other fans pretending to be from the Thrush organization, the archvillians of the television seriesThe Man From U.N.C.L.E.. Johnstone, under his birth name of David McDaniel, was the author of the paperback novel adaptations of the series.

Ted Johnstone also edited I Palantir, and was one of the editors of Shangri L'Affaires.