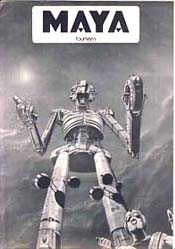 Maya was a science fiction fanzine published in the UK.

The first issue of Maya was released in 1970. it had a couple of editors, starting with Ian Williams for the first two issues. Issue 3, in April 1972, saw Ian Maule take over editorship. As of February 1975, for #7, Rob Jackson assumed editorship, and he remained with the title till it ceased publication after 15 issues, in June 1978.