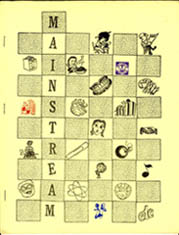 Mainstream was a science fiction fanzine by Suzanne Tompkins and Jerry Kaufman.

Previously, Suzle and Jerry had published The Spanish Inquisition in the 1970s. Mainstream was their return to fanzine publishing in the 1980s from their new location in Seattle, Washington, U.S.A.

The article "Mozart on Morphine" by Greg Benford was selected for reprinting in the anthology Fanthology '87.

After Mainstream came to an end, Suzle and Jerry would return to publishing a fanzine in the 2000s, with Littlebrook.