Difference between revisions of "Macabre (Scotland)" 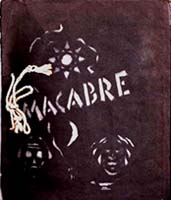 Macabre is a fanzine by James Parkhill Rathbone published in Edinburgh, Scotland.

The first and only issue of Macabre was released in December 1939 by 19 year old Rathbone. It is the first science fiction fanzine to emerge from Scotland.

Macabre was a carbon zine, made of carbon copies straight from the typewriter. As a result very few copies were created.

The subtitle for the zine was "An International Review of Weird Fiction and Fantasy". Contributors included John F. Burke (Satellite, The Fantast), H.C., Dave McIlwain (Satellite), and Phantas.

Macabre also carried news of zines such as Polaris and The Futurian.

The cover of Macabre was created by Herbert Crossley. Notable is the fact that it was not stapled, but was bound with string.