Difference between revisions of "Macabre (Canada)" 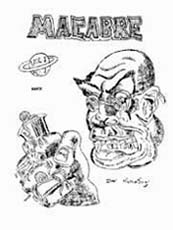 Macabre was a mimeographed and stapled publication. Issue one appeared in March 1948 and was 24 pages, featuring articles by Forrest J. Ackerman (Voice of the Imagi-Nation) and Joe Kennedy (Vampire) and "Departments" by the editors Hutchison and Doherty, as well as a column called "Hodgepodge" by Leslie Croutch, and a column by William D. Grant. Illustrations are by William "Bill" Rotsler and the editors.