Difference between revisions of "Linda Bushyager" 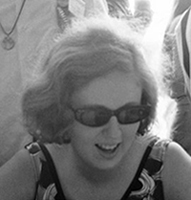 Linda Bushyager is a writer and fanzine editor from the U.S.A.

Linda Bushyager's first fanzine was Granfalloon, co-published with Suzanne Tompkins in 1966 in Pittsburgh, Pennsylvania, U.S.A, with a cover by Adrienne Fein. Suzanne Tompkins was co-editor for the first six issues. Twenty issues of Granfalloon were released, the last one in July 1976.

Karass was the second fanzine by Linda Bushyager, begun while she was still publishing Granfalloon. Published in Prospect Park, Pennsylvania, U.S.A., Karass was a "fannish newszine, invaluable for keeping up with the U.S. scene", said Darroll Pardoe, in his review of Karass # 6 in Checkpoint # 53, of September 1974. It ran from January 1974 till October 1978, with 38 issues published.

Her story, "Manuscript Found in a Coke Can", from Duprass, the fanzine she co-published with Leslie Smith in the 1980's, appeared in the fanthology Fanthology '87.

All the titles of Linda Bushyager's fanzine titles were originally found in Kurt Vonnegut's novel, Cat's Cradle. She has written two books of her own, the fantasy novel Master of Hawks, and the science fiction novel Pacifica, written with John Betancourt.