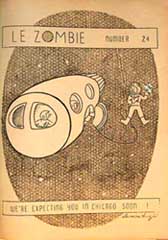 Le Zombie was "published every time a zombie awakens." The first issue was released in Bloomington, Illinois, U.S.A. December 1938, intended as a 'rider' with a weekly newszine called Fantasy News. It was a typed, doubled-sided news sheet subtitled "Tucker's Candid Comment". As of the sixth issue, it no longer accompanied Fantasy News, but was now a 'rider' with Nova. Issue 2, the convention issue, was 6 pages, and Issue 10 of August 1939, saw Le Zombie emerge as a four page zine with photos and a cover, and become a subscription zine.

Issue 28 featured an announcement that the zine would now be a monthly. A number of issues featured actual prints of photograph attached to the cover including one by Harry Warner, Jr.; another is a photo of Paul Freehafer (Polaris), Bob Madle (Fantascience Digest), Erle Korshak, Ross Rocklynne, Walt Leibscher, Dale Tarr, Forrest Ackerman, Julius Unger, Robert Thompson, Gertrude Kuslan (Cosmic Tales, The Nucleus) and Myrtle Douglas (Morojo) (Voice of the Imagi-Nation, Guteto) on the cover and another is a photo of Sully Roberds on the cover. Issue 44 had a photo from the Michigan Convention on the cover. Issue 45 featured the supplementary 1941 Fanzine Yearbook compiled by Tucker, Harry Pratt and Art Widner. All issues featured letters and fanzine reviews and news.

Sixty seven issues were produced between the 1930s and the 1960s. The last print issue appeared in December 1975. After 25 years Bob Tucker resumed publishing in October of 2000, and Le Zombie became an "ezine', called e-zombie. Five issues were released, the most recent in August 2001.

A number of terms were coined in the pages of Le Zombie - the term "space opera" appears for the first time in an issue in 1941.

During World War II Le Zombie teamed with Harry Warner's Spaceways to sponsor the "Fanzine Service" to get fanzines to people serving in the war.

Bob Tucker was also the editor of Science Fiction Newsletter, which he published from 1945 till 1952.