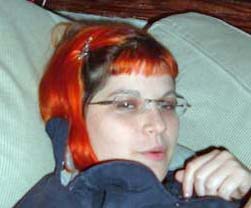 Kate Sandler is the sole writer of the zine Brainiac Zine, as well as the editor of a number of Diatribe Media publications including Sanitary and Ship. She is a core staff member Diatribe Media and has presented workshops at the Allied Media Conference, the Midwest Anarchist Bookfair and the Self-Publishing Media Reform Fest at the WLUW Record Fair in Chicago, IL.

Kate was born in Little Rock, AR, in July of 1982 and grew up in Ann Arbor, MI. She attended Ann Arbor's open schools system and graduated from Community High School in 1999. In 2007, she graduated from Columbia College of Chicago.