Difference between revisions of "Jerianne Thompson" 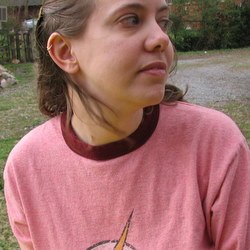 Jerianne Thompson is the publisher and editor of Zine World: A Reader's Guide to the Underground Press, among other zines. She has also published a variety of perzines and a compilation zine about libraries.

Thompson became involved in zines in 1994; her first perzine was A Shattered Mind, which she started publishing as a college student in Tennessee. She has been a reviewer for Zine World since its first issue. In 1999 she moved to Berkeley, CA, and she started a new perzine, Rejected Band Names. While there, she began to assist Zine World's then-publisher Doug Holland with tasks like advertising, store distribution, and reviewer assignments. In 2000, Holland asked Thompson to take over as editor and publisher; she has been the zine's editor & publisher ever since. She moved back to Tennessee in 2001. Her writing was featured in the Zine Yearbook, Vol. 5. and Vol. 7.

Currently, Thompson lives in Murfreesboro, TN. She works at a library, where she started a zine collection. Through her library work, she has presented numerous zine workshops. In February 2009, she took over administration of Zine Wiki, along with Dan Halligan.