Difference between revisions of "Janus" 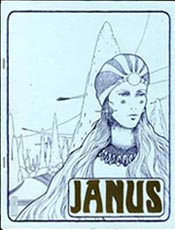 Janus was a science fiction fanzine published in Madison, Wisconsin, U.S.A. in the 1970s.

Janus was edited by Janice Bogstad for the first four issues, who was then joined by Jeanne Gomoll as co-editor. Their fanzine was one of the first feminist sf publications. The name of the fanzine was later changed to Aurora; 26 issues were released in total, 18 under the original name of Janus. It was closely associated with the Wisconsin Science Fiction Convention, or WisCon, as the group behind the zine had started the convention, and some issues of Janus also served as program books for WisCon.

Interviews with Suzy McKee Charnas and Amanda Bankier, editor of The Witch and the Chameleon, were featured.

Janus/Aurora was included in the zine library at the exhibition A Non Utopian Kind of Girl, at The Nursery, in London, UK in 2013.

Jeanne Gomoll continued publishing zines in the 1980s with her title Whimsey, and co-published the one shot fanzine Six Shooter, with Linda Krawecke and Pam Wells in 1987.