Difference between revisions of "J.D.s" 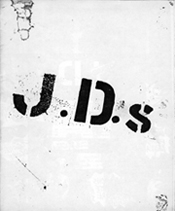 Complete runs of JDs are held by the GLBT Historical Society in San Francisco and the Canadian Lesbian and Gay Archives in Toronto.