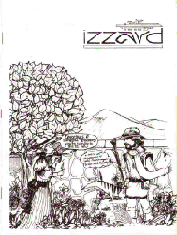 Izzard was first published in 1982. Nine issues were produced, the last one appearing in 1987. It was nominated for a Hugo Award for Best Fanzine in 1984.