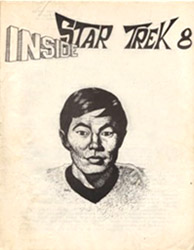 Twelve issues of Inside Star Trek appeared, beginning in 1968. It was one of the few fanzines to appear while the original run of Star Trek was being broadcast. It was the 'official' Star Trek newsletter, and editor Ruth Berman had full access to the Star Trek cast and set. Assisting in the publication of the fanzine was Dorothy C. Fontana, Story Editor and writer of several Star Trek episodes.