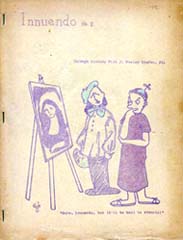 Innuendo was published in the mid 1950s in the U.S.A till 1960, when Terry Carr joined the editorial team of Void. After Terry Carr's death, issue 12, which he had begun when still alive, was published in 1990 by Jerry Kaufman (The Spanish Inquisition).

Innuendo was the fanzine in which Terry Carr and Peter Graham presented "Carl Brandon, Jr." a fictitious hoax fan of color, in order to address issues of race within the science fiction community. Real authors who wrote under the name Carl Brandon included Terry Carr, Bob Stewart, Dave Rike, Ron Ellik, Pete Graham, Miriam Carr, and Karen Anderson. Carl Brandon, Jr. became a very popular fan within the SF community, whose articles appeared in several fanzines of the time, and who published his own title for a short while.