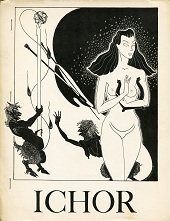 Cover art was by Alva Rogers for the first two issues, and Trin F. Bonn for the final issue.

Dale Hart was also an editor of Shangri L'Affaires during the year 1948.