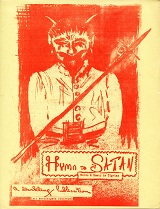 Hymn To Satan was a one-shot fanzine edited by Tigrina.

Hymn To Satan was published in 1941 in Los Angeles, California. U.S.A. It was likely the first filk fanzine.

This undoubtedly has something to do with the fanzine Hymn To Satan, along with the stated intention of Arthur Louis Joquel II to create orchestration for Hymn To Satan, that he mentioned in the second issue of his fanzine Sun Trails, published in October 1941.

Hymn To Satan is included in the collection of The University of California Riverside Libraries.